First in the Calypso Falls series. 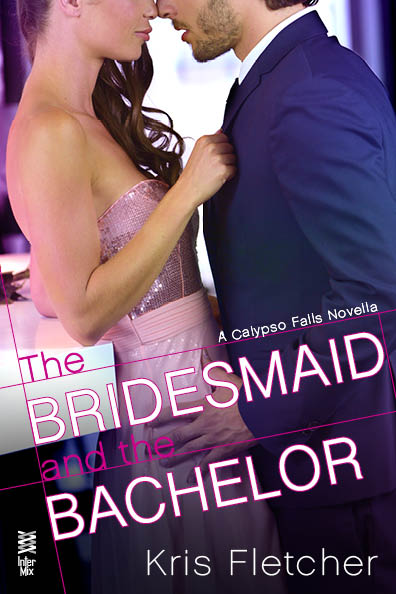 The bride may be the one to wear a veil, but this time it’s the bridesmaid who has something to hide. Kyrie Elias has agreed to pretend to be her twin sister in a friend’s big fat Vegas wedding. Pulling off this deception could mean a chance at love for her sister and the forgiving of a loan Kyrie needs to save her struggling coffee shop back in Calypso Falls. But she didn’t count on the wedding party including gorgeous groomsman Ben Sitka, the sexy scientist who came close to stealing her heart two years ago.Ben would know Kyrie anywhere. The electric connection between them is something she can’t disguise, and something he’s never forgotten—not since she ran out on him after a week of bliss. Now he vows to give this bridesmaid a reason to blush. He’s willing to keep the secret of her true identity, but he’s also determined to expose her true feelings for him, hoping that Kyrie will come to see that the person she’s most deceiving is herself. Includes an exclusive preview of the debut novel in the Calypso Falls series, Life of the Party.
Please note: THE BRIDESMAID AND THE BACHELOR is a novella.

Kyrie Elias walked into the gaily decorated Bellagio function room, scanned the space filled with folks she was charged with deceiving, and decided the only sensible place to start was the bar.

She wove her way through the room, smiling politely at all she passed—the other attendants for the impending Boyle-Sitka nuptials. Her sister had assured her it would be easy to carry out this charade. The bride is the only one I know really well, Paige had said on the phone. You know her well enough to convince her you’re me. And she’ll be too busy to spend much time with anyone, let alone a late game fill-in bridesmaid. You can pretend to be me with no problem.

Right. Paige could pull this off with no problem. Kyrie was pretty sure she was going to spend the next three days carrying a paper bag in her purse so she would have it handy when she started hyperventilating.

She squeezed between some husky shoulders—all the groomsmen, according to Paige, were the groom’s former college football teammates—and smiled at the bartender, who stopped midway through pouring a glass of wine to nod at her.

“On second thought, make that a Brazen Mojito. Thanks.”

The bartender nodded and tossed ingredients into a small blender. Kyrie turned to survey the rest of the guests, trying to get a feel for the land before she dove in.

She would have pegged Siobhan as the bride even without having met her a few times. The little silver hair band with a short veil attached was a helpful clue. Kyrie would bet a very large amount of the money she no longer had that Siobhan’s hairpiece hadn’t come from one of the tacky tourist shops just off the Strip. And unless she missed her guess, the stones winking out from the silvery half-circle could probably have paid off the debts that had left Kyrie with no choice when Paige proposed this masquerade.

Do this for me, Kir, and I’ll forgive the loan. Totally and completely.

“Miss?” A light touch on her elbow had her turning and accepting her drink. Ew. Paige really needed to switch to something that didn’t look like it was the residue from an industrial accident.

Pretend you’re sampling a new coffee for the shop. That, she knew how to do.

“Over the lips and past the gums.” She took a deep breath, tipped the concoction high, and promptly choked.

But not from the booze.

She stared in horror at the tall, lanky man who had just entered the room. The black haired man now laughing and slapping the back of one of the football players. The man with the bluest eyes she had ever seen, once she had peeled away his tinted glasses and tossed them to the ground two years ago.

Ben Sitka. Brother of the groom. The one man who could blow her entire deception out of the water before it truly began.

She whirled back to face the bar, wishing she’d thought to pack that Emergency Hyperventilation bag before she came to this party. She needed to … crap, what? Running was out of the question.

Right. She needed to stay calm. Ben hadn’t spotted her, and if he did, so what? It had been almost two years. Her hair was styled like Paige’s; her clothes came from Paige’s closet. He knew she was a twin. All she had to do was act like she’d never met him, introduce herself as Paige, and carry on. She could do this.

Assuming, of course, she could stop herself from turning into a puddle of something hot and needy the moment he spoke to her. Or once she caught a whiff of that soapy-musty-slightly-bookish scent that had lingered in her memory all this time. Or if he touched her.

She really couldn’t let him touch her.

The bartender’s quiet question made her open her eyes. Ack. She must have closed them when she started remembering. Not a good plan when tracking the one person who could blow her cover.

He nodded toward the drink. “Better go slow, then. That thing’ll knock you on your ass faster than you can say, ‘Welcome to Vegas’.”

“You’re right.” Grateful for the excuse, she set the glass on a tray and wiped her damp palms on her skirt. She could wait and hold her breath until Ben noticed her, or she could take matters into her own hands, start mingling, and make her way to him naturally. The way Paige would do it. The way Kyrie had taught herself to draw out her customers.

She could do this.

She tilted her chin, did her best imitation of her sister’s smile—breezy, carefree, I love being with people! —and dove back into the wall of shoulders, aiming for the bride.

Maybe she should have mentioned Ben to Paige when they made this deal. But seriously, who would have believed he would be there? Yes, he was the groom’s brother, but when she had last seen him, he had been on his way to a year in Brazil, then a stint in Antarctica. She was pretty sure that people couldn’t simply hop a flight out of McMurdo Station for a long weekend, even for a family wedding.

Though in a way it was kind of nice to know she wasn’t the only one who’d had her plans yanked out from beneath her since they’d had their little…um….

Damn. Two years since he turned a lonely week at the lake into the Best Vacation Ever, and she still didn’t know what to call what they’d had. But she sure had some great names for the things they had done. Not that she should be thinking about that now, though dear Lord, how could she not?

Kyrie slid into the mass of short dresses and long hair swirling around Siobhan. It didn’t take long.

“Paige!” Siobhan stopped in mid-story and squealed, leaning forward to wrap Kyrie in a giant hug. “You made it! I got so freaked when you said your flight was delayed. I just knew something was going wrong and you wouldn’t be able to make it and oh my God, sweetie, how could I possibly get married without you?”

Thank heaven that seemed to be a rhetorical question. Otherwise, it might have been tempting to remind Siobhan that Paige had only been added to the wedding party after another girl had the nerve to get pregnant.

“Girls, this is Paige. We were roommates in our freshman year at Bowdoin, and we’ve stayed like this ever since.” She linked her arm through Kyrie’s and pulled her close. “Paige, this is Gen and Rachel—I work with them—and ….”

The names went on. Kyrie smiled and nodded and squealed where it seemed appropriate, all the while alternating between listening for a shift in Siobhan’s tone or some sign from Ben. So far, so good. If the rest of the weekend went this smoothly, she’d be golden.

She took an outstretched hand from the second or third Megan of the night, looked into the crowd, and knew she’d been spotted.

She didn’t have to be close to Ben to notice the way he stopped moving, the way he seemed to have taken a deliberate step back even though she could swear he hadn’t actually shifted position. His glasses had slipped partway down his nose and his hand hovered in midair, caught in the act of preparing to push them back into place. Behind those glasses his eyes were round and stunned. His mouth hung open the slightest bit. Honestly, if she weren’t so terrified, she would have to giggle. All he needed was a lab coat and she could slap him on a poster for the World’s Sexiest Absent-Minded Professor.

As it was, she sent silent thanks skyward that she had seen him already and was prepared for this. She made herself meet his gaze. Easy. No worries, no flinching, and oh crap, he was gulping and shoving his glasses back into place as if hoping they would tell him he wasn’t seeing what he was seeing.

She smiled in his general direction – polite, friendly, the kind that could be bestowed on any stranger seen across a crowded room – and turned her attention back to Megan 2.

“I’m sorry, how did you say you know Siobhan?”

“Well, I was at a meeting of the Junior League and they needed people to work on the Black and White Ball, and I wasn’t sure if it was the right job for me because, you know, I’m not very good at organizing things, but then Siobhan leaned over and said ….”

It was almost a relief when she saw Ben heading in her direction. Things might get ugly, but at least they weren’t going to be as boring as Megan 2’s story.

“… we would only have to meet once a month, so that made me think that—”

For one moment, she let herself soak in the wonder in his voice. So many emotions packed into that one tiny utterance, and to know it was for her—not for Paige, not for any of her other sisters, but for her, Kyrie—well, hearing that amazed disbelief both filled her and broke her. Because there was no way she could let him know the truth. No way she could follow through and see what would happen if she were to whirl around and tell him it was her and fall into his arms the way she longed to do.

She steeled herself and turned to him.