Hello, and welcome to the first blog post of 2016! I hope your holiday season was both merry and bright. We did not have a white Christmas. In fact, on Christmas Eve I had to paint my toenails because it was so warm, we were in capris and sandals. (However, winter has since remembered that we exist, as shown above!). Despite the bare ground, our month was certainly a joyous one, filled with laughter and gifts and travels and squabbles (after all, this is Casa Chaos) and games and songs and way too much food. Santa made an appearance, probably for the last time: Tsarina is reaching the age when secrets need to be shared. Can I confess that I’m not looking forward to this talk? The birds and bees are easy compared to the discussions of Santa and the Tooth Fairy.

In any case, it was a full and filling month. Our old friends Elfie and Jingles

(our Elf on the Shelf companions) were joined by a Hanukkah gift, the Mensch on the Bench. The three of them had grand times all around the house. Menschie turned out to be a whiz at helping people, so he was one of my favorites. The elves were more interested in ziplining across the room on a piece of Christmas ribbon.

We got the decorating finished about three days before Christmas, despite being slowed down by the painting projects. Here’s a hint: if you ever get the bright idea to paint a room or two in the time between American Thanksgiving and Christmas, remind yourself that it’s one of the stupidest ideas you could have. Seriously, WHAT was I thinking? But both the family room and the bathroom look immensely improved, as you can see from the Before and After pics. 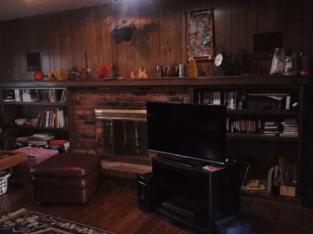 The Mensch and Maestro both came home for Christmas, which was a delight for all of us. The Geek and Geekess did not. We missed them but couldn’t begrudge them their time away, as they were taking part in a Birthright trip to Israel. Here’s one of their less-beloved travel companions:

There was a trip to the Great White North, to visit family and friends and the Royal Ontario Museum. Hubs took the boys to NYC for an overnighter, where they saw King Charles III (splendid, they said). The girls and I took advantage of that time to finally see The Force Awakens. OH YEAH. I thought they did a great job of honoring the old characters while handing the story over to the newcomers. (Though did they all have to be so young???)

All told, it was a month that left us slightly breathless, only a little relaxed, but definitely filled with the joy of the season. We’re ready to dive into the new month and the new year. Here’s to a fabulous 2016!

There hasn’t been a lot of reading this month (fancy that!). But as always at this time of year, I’ve been perusing a lot of blogs and articles about setting goals and sticking to resolutions. One of my favorites is the Barking Up The Wrong Tree newsletter. One of my favorite posts is called How To Stop Being Lazy And Get More Done. Highly recommended.

We played a lot of

games over the holidays, but the newest (to me) was called Ticket to Ride. It’s one of those games that starts off kind of slow while you’re laying the framework (you’re trying to build rail routes across North America), but by the end it was white-knuckle, drag-’em-out, heavy breathing ferocity. We loved it. It takes a good hour or more, and requires a big space (like the whole table), so you can’t just whip off a game on the spur of the moment. But if you have the time, it is tons of fun.